The campaign trying to win Cobb voters’ approval of a six-year, $750 million special purpose sales tax is being funded almost exclusively by companies that stand to gain from its passage, according to the Oct. 23 campaign finance report submitted by Secure Cobb’s Future.

In fact, 10 of the 17 companies that have contributed to the pro-tax campaign have collectively made $58.3 million in county contracts over the past two years, according records obtained by The Atlanta Journal-Constitution. 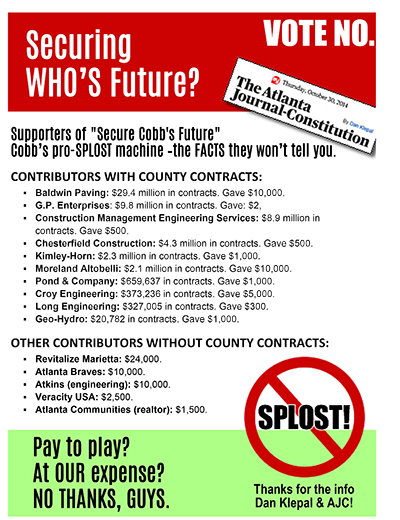 One notable contribution also came from the county’s future resident, the Atlanta Braves, which kicked in $10,000 on Oct. 7, according to the report.

The Braves announced last year that they will move into a new stadium in the Cumberland Mall area for the 2017 season. Funding for more than $83 million in transportation improvement projects near the new ballpark site on Cobb Parkway is included in the special purpose sales tax plan.

Braves’ spokeswoman Beth Marshall provided a written statement Wednesday that said: “The Atlanta Braves are proud to support the Cobb County SPLOST and believe it is critical to the future of Cobb and its citizens. We aren’t contributing for any specific reason, but rather we believe in the referendum as a whole.”

Companies contributing to the campaign with county contracts over the past two years include:

On Tuesday, Cobb voters will be asked to renew a penny sales tax that will be used for transportation infrastructure, libraries, public safety and more. If approved, Cobb’s sales tax would remain at six percent: four percent for the state; one percent for schools; and one percent for local government.

The largest single contribution to the campaign was $24,000, and came from the non-profit Revitalize Marietta, an organization co-founded by attorney and political consultant Heath Garrett.

Garrett’s company — Garrett McNatt Hennessey & Carpenter 360 — was hired as Cobb’s lobbyist in May, and will be paid $168,000 for that work. That contract is not part of the $58 million in county contracts identified by the AJC.

Revitalize Marietta’s “mission is to promote the social welfare, specifically by working to revitalize areas of the City of Marietta and of Cobb County,” Garrett said. “In order to further that mission, Revitalize Marietta supports the policy goals of the 2016 SPLOST.”

The Cobb Taxpayer’s Association, the group opposing the so-called Special Purpose Local Option Sales Tax, raised just over $3,000 in cash during the same period. All of that money came from individual donors, with the largest single contribution at $400.

In addition to the cash, the anti-tax group received $2,300 worth of in-kind contributions from Rosetta Stone Communications, which provided automated calls for the organization.

“There’s a clear difference between the type of money we get and from where we get it,” said Lance Lamberton, president of the taxpayer’s group, which opposes the SPLOST. “We’re individual taxpayers who are supporting our efforts here. It’s grassroots. Their support comes from entities that hope to profit greatly from passage of the SPLOST.”

If approved by voters, the county’s transportation department will receive a total of $287.4 million — which is more than half of the revenue dedicated to county agencies. The county’s six cities also will receive funding, along with agencies that serve the entire county such as the Medical Examiner’s Office, courts, and Animal Control.

Other contributors without county contracts: