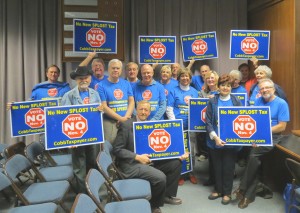 To paraphrase the great English playwright, William Shakespeare, “it is better to have fought and lost, than to never have fought at all.” That is certainly the way I feel in the aftermath of the SPLOST election. Those of us who are committed to the ideals of less government and more personal and economic freedom, silence and inaction is not an option when faced with a clear opportunity to advance those ideals, as was the case with the 2016 SPLOST.

So how was it that we lost? While our opponents will claim that the following explanation is “spin”, meaning that it is an excuse and/or rationalization for not prevailing at the polls, there are no doubt real and substantive reasons for the outcome, and lessons to be learned from it, which we ignore at our peril.

First and foremost was the huge disparity in financial resources SPLOST proponents had at their disposal. As in past SPLOST elections, after you factor in the $200,000 donated to the pro-SPLOST camp by the Cumberland and Town Center Community Improvement Districts (CIDs) for allegedly “educational” purposes, we were outspent by a ratio of approximately 100 to 1. Under the circumstances, we performed very well given the relative closeness of the vote.

With that kind of money, proponents were able to inundate tens of thousands of voters with literature and robo-calls that we could not match. In fact, most of these voters were only exposed to the pro-SPLOST arguments, which combined with the flowery language of the initiative on the ballot, led to many voting yes, who otherwise would not have done so. Other factors which worked for and reinforced this advantage were as follows:

Another question asked in the aftermath of the vote, was: “Why was the margin less close in a general election than it was in the previously called special elections?” I was one of those who thought that a general election would work in our favor because proponents would not have the advantage of targeting special interest voting blocks to skew the results. But in hindsight, we now know that in a general election, there was a preponderance of uninformed voters who are voting on it for the first time. And if all they got was the pro-SPLOST message, then they are going to vote accordingly.

During the campaign, indications that this would play a factor were evident, but there was really nothing we could have done about it. The first yellow light was a report in the MDJ that according to an Insider Advantage poll, the pro-SPLOST camp was in better shape than they had been in previous SPLOST campaigns one month out from the election. Then an MDJ on-line reader poll showed our side with only a 56 – 44% advantage. And that was before the pro-SPLOST direct mail and robo-call blitz the weekend before the election. This same poll in 2011 showed our side ahead by about a 70 – 30% ratio.

Nevertheless, I think all of us can hold our heads high and have no regrets on the way we conducted our campaign, other than the biggest one; i.e. that the SPLOST passed despite our best efforts. There are many things we were able to do in this campaign that we were not able to do in past campaigns and many unsung heroes that made them possible. The following are just a few examples, and my apologies in advance for anyone who I might have inadvertently left out:

My final reflection, as I drove my car and rode my motorcycle and bicycle throughout the County in the days following the election, was seeing the many lawn signs on the lawns of our fellow taxpayers, from opulent residences in East Cobb to modest dwellings in the South; people of all races, ages and income levels joining together unafraid to declare to their friends, family and neighbors that they opposed this SPLOST and the abuse of trust that it represents in the hands of our elected leaders.

This outpouring of support was in stark contrast to the pro-SPLOST campaign where I did not see so much as one of their signs on a private lawn, for their campaign is predicated on enriching the special interests at our expense, and that is not an appeal which motivates individuals to stand up and be counted. Their support is broad but shallow, whereas ours is broad and deep, and for that I take solace.

So Where Do We Go From Here?

The good news is we do not have to spend our time and efforts on another SPLOST campaign for another eight years, and I am looking forward to tackling my honey do list, which unlike the 2016 SPLOST, does not lack specificity, and has no “To be determined” items on it. But thanks to our County Chairman and the determined support of the Cobb Chamber, the Braves and Cobb’s Director of Transportation, we face the prospect of another effort to get the Bus Rapid Transit (BRT) project imposed on us via a bond referendum in March of 2016. This can be prevented if we can convince three of the five commissioners to vote against putting it on the ballot. However, Tim Lee and Commissioner-elect Bob Weatherford are already on record as supporting it, so we have our work cut out for us.

In this regard, it is interesting to note that one of the arguments for the SPLOST was that it would avoid incurring any bond indebtedness. But the same cabal that used that argument are also the ones that foisted $400 million in bond debt for the Braves Stadium, and will not hesitate to do it again with the BRT. And they feel emboldened with passage of the SPLOST, and Clayton County’s vote to expand MARTA.

In case you are scratching your head and asking why anyone would support a mass transit project that will do nothing to relieve traffic congestion and will actually make it worse — at huge capital expense and ongoing operating expense amounting to millions a year — consider the following:

Yet despite the powerful forces that will be harnessed to get the BRT passed, the spendaholics face the same daunting task with BRT that they faced with the Transportation SPLOST in Cobb County two years ago. Moreover, a year and a half is a lifetime when it comes to politics, and a lot can happen in the intervening 17 months. For now, let’s rejoice with our families and friends as we head into the holiday season, and be grateful for the blessings that we still have as citizens of this great country.